I love having friends round for supper, I was planning this menu for days beforehand! 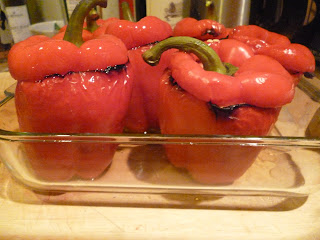 This is taken from the front cover of Sainsbury's magazine. The peppers (six of them!) are cooked, along with the sliced off tops, in the oven with olive oil , for about 20 minutes or so, though I would say leave them a bit longer if they are quite big, so that they soften up nicely.
Fry some onion and garlic, until they are soft, then stir in some cubes of bread (sourdough is a good one, but you can use any nice bread) and torn prosciutto. Cook this until the bread is toasted and then stir in some chopped cherry tomatoes and some herbs, basil is always good.
Then, slice some mozzarella (or goat's cheese), remove the peppers from the oven, stuff with the onion-bread mixture and top with a slice of cheese. Bake this again for another 10-15 minutes, then serve the peppers drizzled with some basil and olive oil with the tops on the peppers.

A salad (lemon and herb drizzled), olive bread and some parmesan... 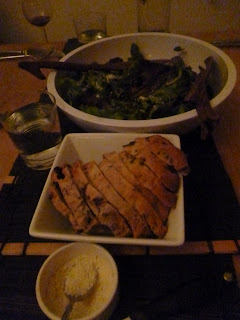 This one is taken from BBC Good Food September Issue. Really easy to make while you chat and drink Prosecco. First, roast some thin slices of new potatoes for about 20 minutes, drizzled in olive oil. Then, season your chicken pieces, and add them to the roasting tin with some shallots, pancetta, lemon wedges and  fresh oregano. Drizzle with some more olive oil and roast for another 20 minutes. Next, pour over a glass of white wine and about two glasses of chicken stock, and roast for another 20 minutes or so until the chicken is cooked through. Really good! 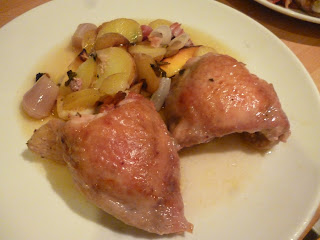 And for the finale!


Speaks for itself. Even my Italian colleagues liked the leftovers.