Where better to take two kids on a rainy Sunday than to A CHOCOLATE SHOW! ?

Not only did I have a press pass, and an amazing choc-filled goodie bag...

... but I was able to teach them the origins of chocolate, from cacao trees, to cocoa beans...

... Listen to a brief introduction to the beautiful chocolate sculptures inspired by architects, designers, and fashion, each piece telling its own story, by Désir du Chocolat...

... Peruse a wonderful range of chocolate animals, accouterments, and chocolate lollipops in various shapes, including a toothbrush, from ChocoPassion... 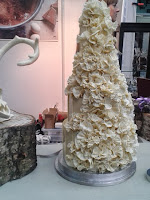 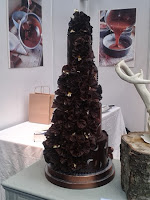 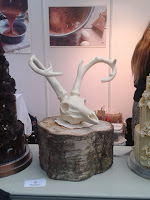 ... Sample a range of Italian flavoured chocolate, displayed in beautifully coloured wrappers (the blue one is vanilla!) by Venchi...

... Watch a demo of the Fat Duck's chocolate techniques, by Hideko Kawa, Excutive Pastry Chef, The Fat Duck, sit up the front, and cheekily snatch all the wonderful samples...

... I think we'll need a bath after all this chocolate eating...

...And, most importantly, we are waiting by the phone in the hope that we have won this fantastic haul of chocolate goodies by Chocolate Lovers, all proceed going to The Sick Children's Trust and Alzheimer's Soceity. Win, win. 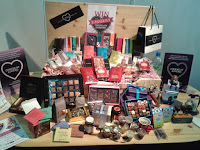 Thanks to all the exhibitors for their generosity, and to NudgePR for the tickets.
Posted by Unknown at 23:50:00 No comments:

After enjoying an amazing evening discovering the joys of soy sauce, I wanted to cook something with the end-of-the-week fridge contents. Some mince beef that needed to be used, a few store cupboard ingredients, and I came up with this:

Marinade the minced beef in the soy sauce, half the garlic, chilli, and five spice. The longer you leave it, the better, but half an hour is fine (overnight is fab!). Shape the mince into about 12 meatballs.

Heat some rapeseed oil in a pan, and fry the meatballs for about 10-12 minutes until browned all over and cooked through. Remove from the pan and set aside.

Add the rice, the remaining garlic, and cumin to the pan, and fry for about 30 seconds. Add the stock so the rice is covered, cover the pan and simmer for about 10 minutes until the rice is almost cooked.
Pour off any excess oil at this point. Stir in the peas and the lemon juice and cook for a further 2-3 minutes.
Add the meatballs back in and warm though. Serve with lemon zest.

If you don't cook all the meatballs, have them the next day with some quick pilau rice - just as delicious!

Kikkoman in the (Sushi) Balls

Yeouch! Ok, I know it's generally sushi rolls, rather than balls, but I couldn't resist! I love a pun...

I had a wonderful evening as a guest of Mr Bing, CEO of Kikkoman UK at Matsuri Restaurant in Bury St for a masterclass in sushi making by Head Chef Hiroshi Sudo, a demonstration by Kikkoman Ambassador Simon Hulstone, and meeting a bunch of food bloggers who all got a little, well, saucy!

Kikkoman Soy Sauce, I'm happy to say, is a naturally brewed soy sauce with only four ingredients, soybeans, wheat, salt and water which appeal to all of our senses, sweet, sour, bitter and salty, as well as the lesser known savoury sensation that is 'umami'. Umami gives Kikkoman its special typical flavour making it different from other soy sauces, as we discovered in a blind taste test. The unanimous consensus was that it was lighter and more natural due to the non-chemical natural brewing process, and its rich, full flavour was mouth-watering yet delicate. Containing no sugar, it's ideal for marinading as well as to cook with on high temperatures. Read more about it on Emma Nutrition's blog.


This very act was demonstrated to us by Simon Hulstone, Michelin starred Chef and owner of The Elephant in Torquay where his 30+ acre farm provides the ingredients for his restaurant. He brought with him his home-grown tenderstem broccoli and some scallops from Devon. He quickly whizzed up a dressing by mixing soy, mirin, a touch of sesame oil, and whisking in olive oil, the soy sauce being the only seasoning required. The broccoli was grilled on the Teppanyaki for a few minutes, the scallops flash fried for a mere 30 seconds each side, caramelizing themselves, all drizzled with the dressing, et violá: Oishí!

Next we were shown some simple sushi rolling by Hiroshi Sudo,  Head Chef at Matsuri (Matsuri, incidentally, means 'Festival' in Japanese - it certainly was a feast!). Using a bamboo sushi mat, he deftly and expertly laid out nori, sticky rice, a tiny strip of wasabi, and the soy sauce marinated salmon, and rolled it up to a square shaped roll, and chopped it evenly into six pieces.

I had to ask Mr Sudo how the nori stayed in place, was it simply water or some inherent stickiness?
In answer, he had some nori brought out just for me to play with, where I was able to fold the rice up inside the seaweed and use a few grain of the rice as the natural edible adhesive. The rice is made so sticky by coating in sushi vinegar, made from rice wine, salt, and sugar.
My first ever sushi roll! Soy proud!

We were then served an assortment of sushi and rolls: tuna, salmon roe, white fish, and scallop nigiri, and salmon, tuna and spring onion rolls, with a daub of wasabi and pickled ginger as is traditional. My mouth is too small for sushi, I discovered, but that didn't stop me as we were robed in large white bibs on chains! All of us, not just me. To be fair, I needed it the most... Emma Nutrition can testify to that...

One Japanese dish I am familiar with is tempura, this lightly battered prawn, squid and vegetable dish was also served with Kikkoman to dip. Soy sauce in each course, it is possible (I'm thinking of dessert...?)


For the main course, four chefs appeared to cook for us at the Teppanyaki, right there in front of us. We were offered a choice of Ginger-Marinated Alaskan Black Cod or Scottish Angus Dry Aged Fillet Steak. Steak for me please Chef, medium rare. Served with a ginger, soy and cream dip, with green and white asparagus, and a Japanese style vegetable dish, Kikkoman-infused, of course. Beautifully cooked, tender, and yes, I'm going to say it, soyalicious. Not over-poweringly so, just very subtle.
I also tasted the cod (courtesy of The Food Curator - cheers Michael!), which was like no other cod I've ever tasted. A tough call.

Just when you think you can't fit anything else in, along comes dessert. Surely there is no way they can incorporate soy sauce into this last dish? Well, yes there is. Our Fire-Ball Ice Cream, served with caramelized pineapple (grilled right there with the soy) and pancakes, was phenomenal - doused in brandy (although don't quote me on this - I was feeling the effects of the rather delicious peach wine at this stage!) there was a fire-ball moment, a communal whoop, and yes, there's always room for dessert, especially one as delectable as this.


Try out a Kikkoman recipe for Meatballs and Pea Pilaf here.
Or a One-Pan Chicken Recipe.
Or even a Pad Thai with Salmon.

Cupcakes, for a friend's little boy turning five this weekend, who is a fan of the Dinosaur Train cartoon show.

Vanilla cupcakes with orange buttercream icing topped with personalized edible toppers and green cupcake wrappers (both from eBay) in keeping with the colour scheme of the cartoon.

A cake for a gentleman who is turning 65, and sells designer menswear. 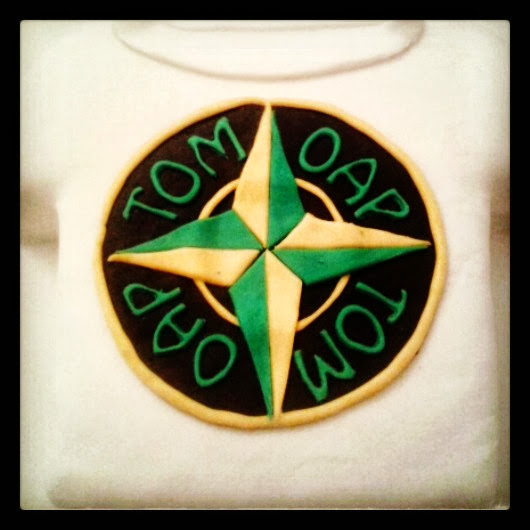 My favourite kind of supper. Quick, simple, and completely unexpected! A recipe from Lorraine Pascale's book Home Cooking Made Easy. Perfect for the 5:2 diet, if you serve it without any rice!

Prepare all your ingredients first, as the cooking is very quick - like most Asian dishes, it's 90% preparation (something I learnt at the School of Wok!). Lightly toast some sesame seeds in a dry frying pan - it will take literally seconds at a high heat, so keep an eye on them. Mix 50g light muscovado sugar, 80ml rice wine, and 65ml dark soy sauce in a bowl. Slice 2-3 chicken breasts into thin slices and season. Heat some rapeseed (or vegetable/sunflower) oil in a frying pan, and fry the chicken for about 2 minutes. Add some chopped ginger and garlic and fry for another minute. Next, add in the sugar/soy/rice wine mixture and simmer for 3-5 minutes - it will still be quite a thin sauce. Throw in some jauntily sliced spring onions and cook for another two minutes.
Take off the heat, scatter with the toasted sesame seeds and serve immediately, with some rice and crisp green salad, if you wish.
Posted by Unknown at 22:58:00 No comments:

Think you can't cook Chinese food at home? Think again! I went along to a Dim Sum class at the School of Wok recently, to follow on from my Quick Fire Street Food class. We learnt how to make Siu Mai, which is a delicious steamed Dim Sum, made from minced pork, prawns, chinese mushrooms, sesame oil and an egg white, with seasoning, all mixed together and beaten by whacking it from a height into the bowl with your hands. Great to relieve any frustration!

A teaspoon or so of this mix is then placed in the centre of a circular wonton pastry, and using one hand to cup the pastry, the other to push the mix down and rotate it until it forms the shape you see below. Looks easy, but takes a bit of practice!

The open wontons are then steamed in a bamboo steamer for about 10 minutes. I don't have one (yet! that Christmas list is growing) so had to improvise, but they cooked beautifully and drizzled with some dark soy sauce, tasted delicious!

It was so much fun learning to make dim sum - something I never thought I could do at home, and it really easy far simpler than you'd think. At the same class we also learnt how to make Jiaozi, really flavoursome half-moon shaped Chinese dumplings, which are deep fried; The Most Delicious BBQ ribs, cooked in the oven, the longer, the better which just fell off the bone, and are definitely next on my list to try at home; and Glutinous Rice in Lotus Leaf, which looks really impressive, and is also utterly delicious.