Overall though, again, I can't fault it, the packaging, the intensity of flavours, and ease of use. At £2.99 for 125 g cocoa powder, it is of course pricier than your usual brands of your usual cocoa powder, but it's a great idea, and is worth having one in your store cupboard in your favourite flavour for spontaneous special bakes. The other flavours available are Chocolate Cherry, Chocolate Chilli, Chocolate Lime and Chocolate Orange. I think I may have to invest in one of each...

"Sugar and Crumbs™ is a family run UK Company with a strong emphasis on convenience without compromise. We offer a range of 24 naturally flavoured icing sugars and 5 cocoa powders that are suitable for every baker at affordable prices. We pride ourselves on our uniqueness within the baking industry and our unrivalled flavour portfolio."
So, how could I resist a tweet which offered some samples of such delicious sounding products in return for a blog post? I mean, that's what I DO! They very kindly sent Coffee-, Salted Caramel-, and Coconut-flavoured icing sugar, and a Chocolate-Coconut flavoured cocoa powder.
In this post I am talking about the coffee and salted caramel. The first thing you think about is: why has nobody thought of this before? Ok, we all use vanilla extract or cocoa, or perhaps lemon zest in our buttercream, but this naturally-flavoured icing is so simple to use, it's quite surprising it's not more readily available. However, S&C seem to have cracked it. The flavour already integrated, you simply use it as you would normal icing sugar. With 1:2 butter: icing sugar ratio (as you do for the usual buttercream recipe) and a splash of milk, it turns out deliciously creamy and subtlety flavoured.

I made my usual chocolate fudge cupcakes, some in silicon tea-cups, some in regular cupcake cases. Using the coffee flavoured icing, I made enough buttercream with 125g to ice 6 (quite large) cupcakes. The smell while mixing was gorgeous, a real coffee cake aroma. Even if you don't like coffee, which my kids don't (that they know of, yet...), this flavour will appeal - my 8 year old loved it! My 7 year old, not so much, but she's not big on icing anyway. Both Himself and I thought it was sumptuous.
﻿ 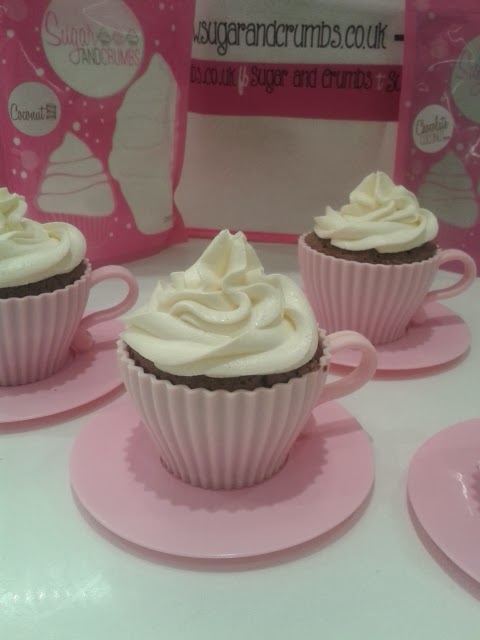 Coffee Cupcakes
Next up the salted caramel. I have to say, this is probably my favourite flavour of anything sweet, so expectations were high. And it didn't disappoint. A hit with all four of us, even the icing-shrugging little one. Again the aroma during the mixing was so enticing. The 250g made enough for 12 generous cupcakes. ﻿ 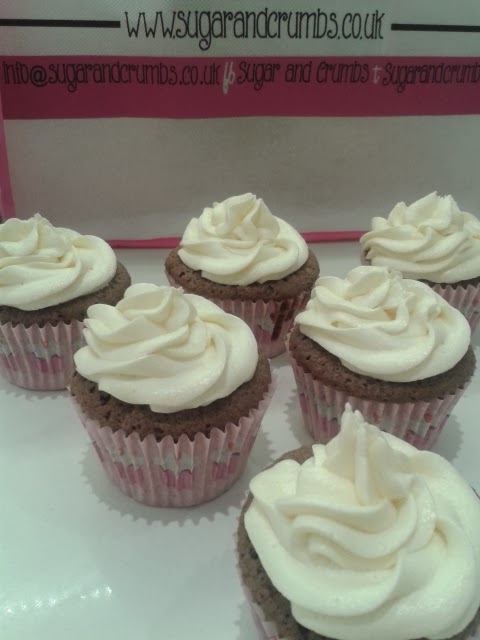 Salted Caramel Cupcakes
Overall, I think it's an excellent product. Simple to use, and the flavours are strong enough to be identifiable, yet subtle enough not to be﻿ overpowering. You can of course used half flavoured, half regular icing sugar to reduce the strength of flavour (and make it go further!) but I think S&C have got it just right. Price-wise, it's slightly more expensive than normal icing sugar, but the packaging is excellent, and it makes flavouring your buttercream a breeze. For the variety of unique flavour available, I do think it's worth it, especially for that special occasion bake.
Big thank you to Sugar and Crumbs for sending me the products, and watch this space for chocolate-coconut cupcakes with coconut icing... I, for one, can't wait!
Posted by Unknown at 20:43:00 No comments:

This is a delicious, slightly spicy, warming dish for this cold, dreary weather. It has the fabulous combination of my two favourite things: chilli and chocolate! The recipe is taken from an old BBC Good Food Magazine (the issue on which I assisted Carol Tennant with the food styling, and I still remember how good it tasted back then). The original recipe can be found on the BBC Good Food website, and as ever I have made some adaptations to suit myself.

1. If you can't get ancho chillies, halve the red chilli peppers and grill them until the skins start to go black. Allow to cool and then peel the skin off and mix with the extra 1 tbsp chipotle paste and hot smoked paprika. Then whizz as described in step 2. Otherwise, put the ancho chillies in a bowl and add enough boiling water to cover. Leave to soften for 20 mins. Meanwhile, heat the oil in a casserole dish, season the chicken, then brown on all sides. Do this in batches. Remove the chicken to a plate. Add the onions to the dish and cook for 5 mins until softened. Add the spices and cook for 1 min until aromatic.

2. Remove the chillies from their soaking liquid, reserve the liquid, and discard the stalks and seeds. Put in a food processor with 4 tbsp of the soaking liquid, the garlic and raisins. Whizz to a paste, then tip into the dish. Add the peanut butter, chipotle paste, tomatoes and 400ml water. Return the chicken to the dish and season. Cover with a lid and simmer, stirring occasionally, for 1 hr.

3. Add the chocolate and continue cooking, uncovered, for 30 mins more. If the sauce looks like it’s getting a little too thick, add some of the chilli soaking liquid or some water.

4. Cook the rice. Meanwhile, put the red onion in a small bowl. Add the lime juice and a pinch of salt. Leave to pickle until ready to serve. When the rice is cooked, add the coriander and lime zest and juice, and fluff up with a fork. Remove the mole from the heat, scatter with the pickled red onion and serve alongside the rice, with soured cream and lime wedges.

A birthday cake for a three-year-old who loves Spiderman (and dinosaurs... it was a toss-up between the two!).
﻿﻿

A sixth birthday cake for a friend's little girl, who is a Snow White fan, with her birthday falling on Valentine's Day, hence the heart shape!
﻿﻿﻿﻿﻿﻿
Topper from The Craft Company
Fondant icing from Decorative Supplies, Enfield (who also do EDIBLE Snow White and many other toppers, if I'd only known beforehand...)

This is a relatively simple, absolutely delicious recipe for Chinese Duck with Pancakes. Not just for Chinese New Year! I saw it on Lorraine, where Bill Granger cooked it with a shoulder of pork on the bone, and it looked fantastic. And better than any takeaway... I've used duck as for me it's more traditional to serve with the pancakes, but I'm certainly going to give it a go with the pork soon.
Serves 6-8 as a starter
Prep time: 10 mins
Cook time: 1 hr 20 mins
Ingredients:
1 Gressingham whole duck
2 tbsp sea salt
1 tsp black pepper
2 tbsp rapeseed oil
200ml light soy sauce
4 tbsp soft brown sugar
3 star anise
2 cinnamon sticks
1inch thinly sliced ginger
5 garlic cloves, lightly bruised with the flat of a knife
2 spring onions, chopped
To serve:
Chinese pancakes
Hoisin sauce
Spring onions, shredded
Cucumber, cut into batons
Method:
Preheat the oven to 220C. Score the duck with a sharp knife.

Place the duck in a deep roasting tray and rub half the salt, the pepper and the oil into the skin. Sprinkle with the remaining salt. Roast for 20 minutes or until the skin is starting to crackle.

Remove from the oven, pour off any fat from the tray, and add the soy sauce, 200ml water, sugar, star anise, cinnamon sticks, ginger, garlic and spring onion to the tray. Reduce the temperature to 180C and cook for a further 1 hour or so, basting occasionally with the liquid, until the duck is cooked.

Slice and serve with the pancakes, hoisin, spring onions and cucumber. 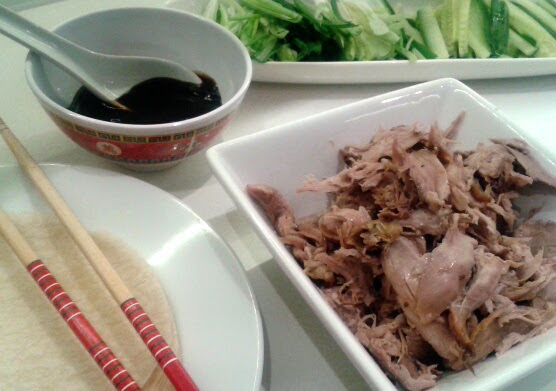