Jamie Oliver's 30 Minute Meals to the rescue again. Cooking for the in-laws is usually well planned and vino-fuelled, but working late meant there wasn't much time...

So I did a quick skewered chicken, with Jamie's satay sauce (ran out of soy sauce though - ah well!) and had excess coriander, turning the satay sauce rather greener than usual, but it still tasted nice.

I stir-fried some onion, peppers, and courgettes, with a dash of lime juice and toasted sesame oil. 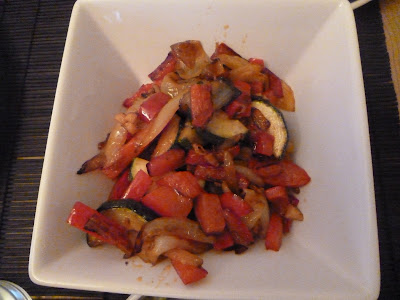 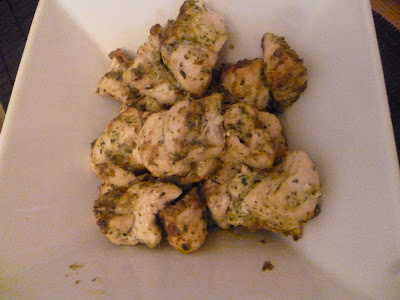 All wrapped up in some wraps and with extra satay sauce for dipping. Yum. 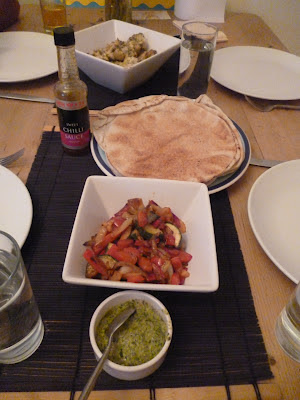 My little girl's sixth birthday cake. I did a practice run with the Giant Chocolate Cupcake, but this was The Party Cake. I started off the same way, but instead of Nigella, I used the mix for the chocolate fudge cupcakes that always works. The base alone could have done the job that I wanted, it took a lot longer than the top to cook, so I think the top was over-cooked a tad, but hey, carry on... 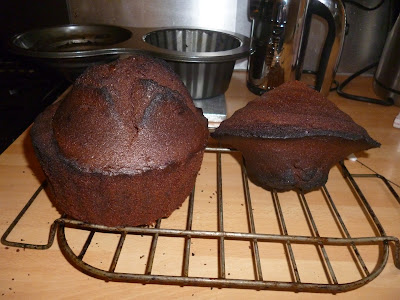 So I chopped the risen bits off and laid one of top of the other - now that looks a bit like a house, no? 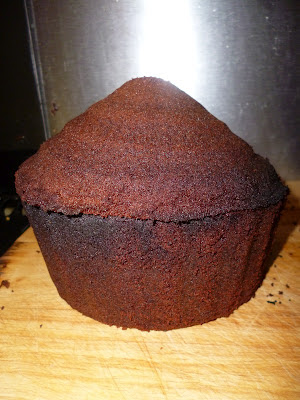 So, let the decorating begin (one bottle of white Rioja, opened). I trawled through Google Images to find ideas and then just went with one or two that looked fairly simple. I got plenty of ready-to-roll sugarpaste icing. I rolled out a green base, and then plonked the base on it. Made some nice pink buttercream icing and plastered the sides with it, then the top of the base, and put the top on the top. If you get me. 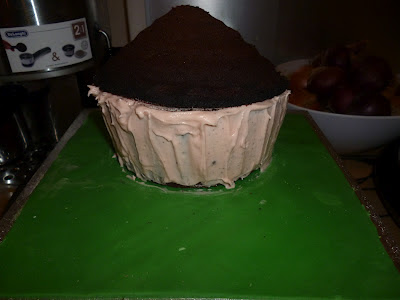 Then I rolled some yellow sugarpaste into strips and laid them on the 'roof', in layers, including a circular one on the very top. 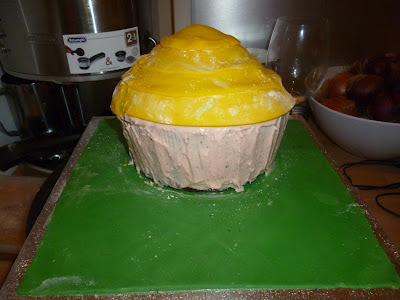 Then the real fun! I made the door, windows and chimney out of various coloured sugarpaste, the 'paving' out of strawberry flavoured buttons, and the little flowers were just little bits of sugarpaste rolled out and swirled around. The ponies themselves, I had to rummage around for in the dark in her toybox, sometime after midnight, as I didn't think pony-modelling was going to be my strong point that late at night. 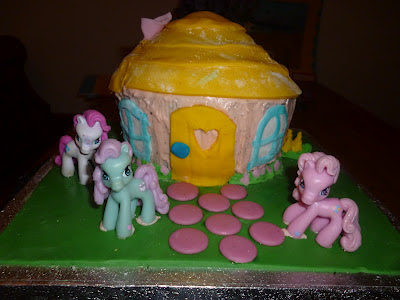 Finally, a little peronalisation with her name in edible icing, number 6 in sparkley balls, and some purple edible glitter. And a carrot.


All my Birthday Cakes can be seen on my Pinterest page. 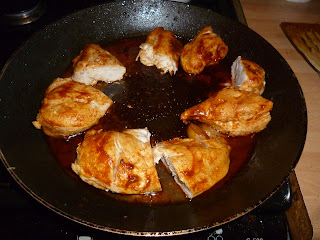 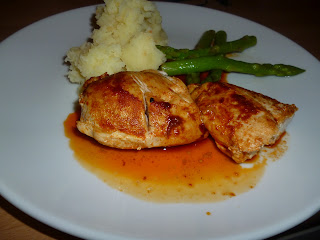 Giant Chocolate Cupcake - How not to do it

I baked a cake for my little girl's 6th birthday tomorrow. I've not done a giant cupcake before, so I wanted to try it out before I do her real party cake on Saturday. She just wanted chocolate. No icing...

So I made my favourite Nigella's Chocolate cake, doubled the mixture and put in it a borrowed giant cupcake tin, which I greased, as advised: 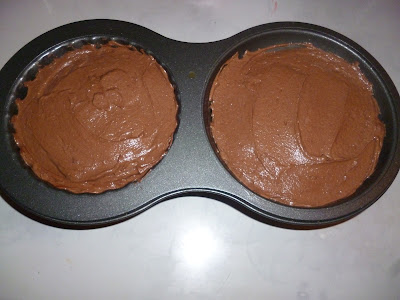 However, it took over an hour to cook. And it turned out, well, a bit broken! 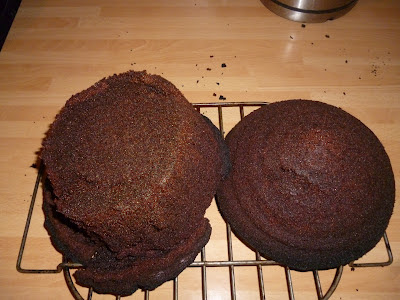 Never mind, I'll just make some chocolate fudge icing, and glue it together. And chop off the burnt tops... 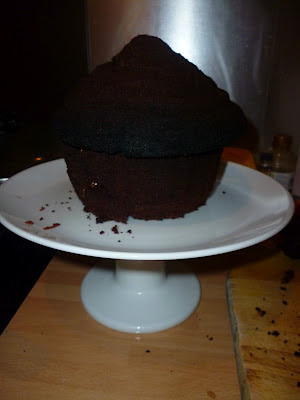 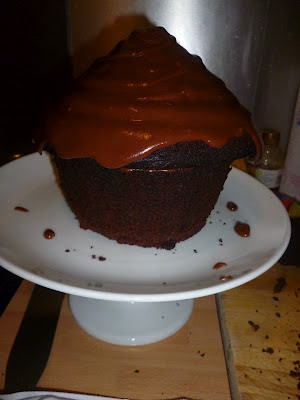 Which managed to drip a lot. But I shaped the drips into letters and the number 6. Then sprinkled with pink things. 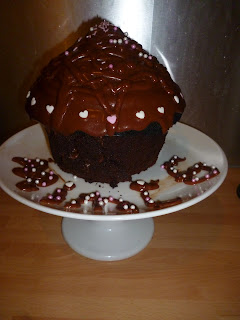 
All my Birthday Cakes can be seen on my Pinterest page.
Posted by Unknown at 23:29:00 2 comments:

This recipe I took from one of those little recipe cards from Sainsbury's Live Well for Less, and adjusted to the contents of my fridge. It was simple and quick and quite light and tasty, after a long day.

1. Pre-heat the oven to gas mark 4 (180 oC) (How do you do degrees on a keyboard?). Lay 4-5 basil leaves on top of 3 over-lapping slices of pancetta and neatly wrap around 1 chicken breast, repeat for the other.

2. Heat the oil in a frying pan and cook the chicken for 3-4 minutes on each side until the pancetta is crisp and the chicken is golden.. Transfer to a baking tray, with the halved cherry tomatoes, and cook in the oven for 10-15 minutes until the chicken is cooked through, then leave to rest.

3. Meanwhile, add the onion and pepper to the frying pan. Cook for about 10 minutes over a medium heat.

4. Serve with rice cooked with raisins, or as the recipe stated cous-cous cooked with dried apricots, and maybe some tzatziki on the top, which I didn't have, but I do know how to make - that's for another day!

This evening's meal was for both adults and kids. I took the recipe from Recipe Junkie's Blog.
I followed it almost exactly, just substituting shallots for the spring onion and when the sauce was ready, I blitzed it to a smooth consistency, as I know my kids won't eat anything with bits in...

Oh, and one rather important adjustment - I don't have a slow cooker! So I pan-fried the meatballs first, really quickly on each side then placed them in my Le Creuset, and then after blitzing the sauce, added this on top, covered and simmered for about half an hour. They still came out quite tender, and most satisfyingly, the kids lapped them up.

However I quite forgot to take a photo when I served up, so I used the last 4 remaining meatballs, and arranged them over the uneaten spaghetti... you'd never know, would you? I still saved the last four for the kids tomorrow.

My girlfriends showed up for our girls' night in. One veggie, one pregnant. I wasn't ready... I thought I was, but not quite. Kids' social lives...


I'd spent most of my day off preparing - shopping, cooking, grinding, but still somehow managed to coerce them into chopping onions, washing mushrooms, pouring the wine, whilst I read the kids a bedtime story.

Still, in the end, it was worth it! José Pizarro's Seasonal Spanish Food, back in action:

During the day, I first made the lemon cheesecake I've made before.


Then the mojo de cilantro, a salty coriander dip - intense but addictive! You have to get Pizarro's book for this, it's just amazing.

A tortilla - onion and potato, it took a bit longer than I expected, to make sure all the potatoes were cooked, but it was well worth the effort.

At this point I had to stop to get the kids from school, ballet lesson, school open day... so it was half an hour to go when I started the rest:


The Stuffed Peppers from Jamie Oliver's 30 Minute Meals. Good flavour but slightly dried out - perhaps I left it under the grill for too long.

Catalan Spinach - usually just with spinach, but Sainsbury's didn't have any, so I got a bag of mixed spinach, rocket and watercress. Sorry José!


Fried mushrooms, with shallots and thyme, again from Pizarro's book, without the bread part. (bit of a blurry photo here, I don't know how much Cava has gone down at this stage).


Chorizo with cider, again from Seasonal Spanish food. I felt sorry for my veggie friend with this one, as it was so good! Full of flavour and I so love that chorizo taste.

And that cheesecake. Lemony! The last two slices I took into work, and they were eaten with mucho gusto!

Much praise all around for my efforts, despite my guests having to chop their own onions!

They even took a doggy bag home, a slice of tortilla, some mojo and a piece of cheesecake for my veggie friend, and tortilla and chorizo for the dad-to-be.


Photographs taken by the only sober person! (Not me...)

Just chop the chicken, (I use scissors!) and put in a bowl with some fresh chilli, garlic, ginger, soy sauce, and olive oil. Let it marinade for a little while. Soak some noodles in boiling water.
Fry the chicken in its marinade on a fairly low heat, then chuck in some chopped peppers and courgettes, and stir fry for about 10 minutes until the chicken is cooked. Then add in the drained noodles, mix around and that's it.
Enjoy...

Ah... Sunday Dinner. Nothing quite like it. Roast chicken and potatoes and graaaaavy, with  yorkshire puddings and some green stuff, and cranberry sauce. Yum.

Followed by Banoffee Sundae (for the day that's in it). I found this recipe in Sainsbury's magazine, and thought it looked easy, so the little one and I gave it a go, while the chicken was roasting.

It's very simple. I seem to be doing a lot of desserts lately... dangerous...

All it is, is some butter (about 40g), brown sugar (125g) and 150 ml double cream. With a pinch of salt, add these to a small pan and bring it to the boil, stirring. Bubble for about 1 minute, then take it off the heat and leave it to cool.

Once you've eaten your Roast, add a little of this toffee sauce into each of four little glasses (if you have nice posh dessert bowls, all the better. I just have tumblers). Top this with a scoop of (vanilla) ice cream, then add some banana slices and pecan nuts. I didn't have any pecans, so I chopped up a Mars bar here! Maybe you could used crushed digestives or even peanuts. Top with another scoop of ice cream and then drizzle over the rest of the sauce. Sprinkle with some chocolate crumbs (from when you chopped up the Mars).

Delicious. The kids loved it! Well, why wouldn't they...