These beautiful organic hazelnuts were a present from Macedonia - brought back from my friend's mum's garden. What to make with them? Well, obviously, pralines...

I dug out Life's A Praline by Juliette Nothomb, another gift, this time from an event at Godiva and the very first recipe was for Gianduja, smooth creamy lingots noisettes. I don't know what any of that means, but the picture looked very tempting and the recipe seemed relatively easy. Preparing the hazelnuts, however, was quite time consuming, but the result was more than worth the effort. With Christmas coming up (less than 5 weeks away now), these could make a delicious, homemade gift.

Firstly, prepare the hazelnuts. Using a nutcracker, remove all the shells and place the kernels on a baking tray. Roast for about 15 mins in the oven at 150 C. 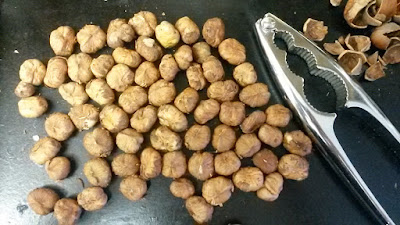 Once they have started to go brown, and the skin begins to crack, remove from the oven and place on a clean tea towel in a bowl. Allow to cool.
When cool, give them a massage inside the tea towel and the skins should flake off. Transfer them carefully to a clean bowl, making sure all the skins have rubbed off. If it's not happening, put them back in the oven for a few more minutes and repeat. You may need a bit of scraping action! Also, this will wreck your tea towel... this part is a real faff, and I have to say, I gave up. Instead I blanched the nuts in a bowl with some boiled water and a teaspoon of bicarb. I let this soak for about 10 minutes, then it was easy to scrape the rest of the skin off with a kitchen towel. Back in the oven to dry roast them again. 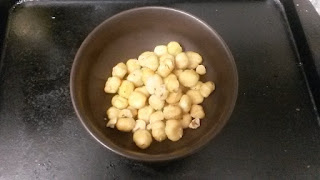 Once the skinned roasted hazelnuts have cooled, it's time to prepare the praline mixture.
Chop the hazelnuts in a food processor.

In a saucepan, place the water, sugar and vanilla and heat up to 120 C. If you don't have a thermometer, just bring it to the boil and let it boil for about 2 minutes. Then remove it from the heat and mix in the chopped hazelnuts. Place this back on the heat and stirring constantly, let it boil until caramelized. It will happen very quickly and dry out so keep an eye on it.

(In the original recipe, the hazelnuts are caramelised whole and then whizzed up in a food processor. I guess this will give a different smoother texture.)

Set up a Bain-Marie and melt the chocolate. Fold in the hazelnut mixture and mix thoroughly. Spread the mixture over a baking tray lined with greaseproof paper and allow to set in the fridge.
I then melted some extra milk chocolate and spread it over the top to give a smooth finish.

Once set, chop into small bitesize pieces. They are rich and luxurious, so you'll only need a small piece. Wrap the rest up as gifts... 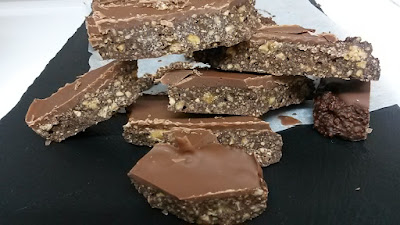 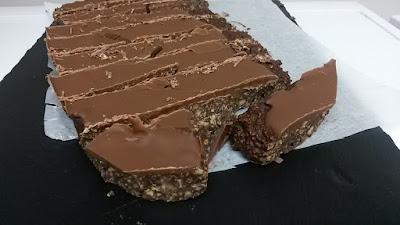 Check out some other fab #recipeoftheweek :

Sometimes an idea just presents itself. Playing with words. I wanted to make a cake for Himself's mum for her 80th and we just talked about the number and what she likes. It was then I wondered if there were such a thing as an After Eight cake. Of course there is! Rachel Allen to the rescue!
I followed this recipe pretty much to the letter. It really is minty! Love it. I might have to make this again for no particular reason...I smothered the whole cake in the icing and then wanted to 'glam' it up a little, so I made some easy chocolate mint glaze to drizzle over.
Simple royal icing for the writing, stick a few After Eights on top, et viola. 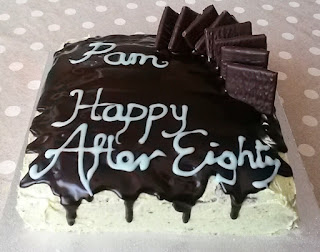 Prep Time: 30 mins
Bake Time: 40 mins
Decorating Time: 45 mins
Ingredients:
For the Cake:
125 g dark chocolate
50 ml milk
150 g butter
150 g golden caster sugar
3 eggs
200 g plain flour
2 tsp baking powder
100 g After Eight mints, broken
For the Icing:
10-15 g fresh mint leaves, chopped (remove any stalks)
250 g icing sugar, sifted
Juice of half a lemon
1/2 tsp peppermint essence
For the Chocolate Glaze:
50 g butter
100 g dark chocolate
1/2 tsp peppermint essence
For Decoration:
After Eight mints (as many as you wish)
100 g icing sugar
1-2 tsp water
1/2 tsp peppermint essence
1/2 tsp mint green food colouring (optional)
Method:
Heat the oven to 180 C or 160 C with fan.
Prepare a 20 cm square cake tin.
Place the dark chocolate and milk in a bowl over a saucepan of simmering water and allow to melt, then set aside to cool, giving it a slow mix.
Cream the butter and sugar in a food mixer until light and fluffy.
Carefully add the cooled melted chocolate mixture and then the eggs, one at a time, mixing continuously.
Next, add the sifted four and baking powder and fold through thoroughly.
Finally add the roughly broken After Eight mints and stir through.
Pour the mixture into your cake tin, and bake for 40-45 minutes until a skewer comes out clean.
Allow to cool completely on a wire before adding the icing.
For the icing, chop the fresh mint roughly, remove any stalks and whizz it up in a food processor with 2 tbsp of the icing sugar. This gives a beautiful minty green colour so I don't think it's necessary to add any food colouring, but of course you can if you wish.
Add this to the rest of the icing sugar, the butter and the lemon juice, with extra essence of peppermint to taste. Beat all together with a mixer until smooth.
Carefully half your cooled cake and spread the icing in between the two layers. It is quite a thin cake, so you don't need to if you prefer not to risk breaking it...
Spread the rest of the icing around the rest of the cake, as smooth as you can.
Prepare the chocolate glaze by melting the butter and chocolate in a bowl over simmering water. Let it cool enough so it still drips, but is not too runny - this may take 20 mins or so. Slowly drizzle it over the top of the cake in the centre, and let it slide out and down the sides. You can help it along a little if it doesn't drip enough! This part really is trial and error and you need to judge the consistency of the chocolate. Allow to set.
For the writing, mix 100 g icing sugar with a little water, add a bit at a time until you have a good consistency for writing. Add some peppermint essence or mint green colouring if you wish. Use a piping bag with a small nozzle to write your message.
Stick on any number of After Eights at random or in a pattern, before the chocolate glaze is too set.
Eat the rest of the After Eights with a nice cup of tea...
See lots of other delicious homemade recipes on A Mummy Too's #recipeoftheweek:

When a restaurant is full of so-called locals, you know it must be pretty good. In Piccadilly, just off Haymarket, lives a small, simply decorated Dosa House - Woodlands. With a rich heritage in India dating back to the 1930's, Woodlands first opened in Maryleborne in the '80's and have expanded to Piccadilly and Hampstead since. Recommended by a food-loving friend for the dosas, I was keen to give it a try - although if I'd walked past it on Panton St I might not have been tempted in. A slightly dated, shabby exterior leads to a simple wooden dining room with little atmosphere and no music. It was about half-full, however, of what I took to be people originally from South India, dressed in sarees and dhotis and indeed western clothing too, milling in and out as if it were a Keralan food court, ordering dosas, eating quickly and then moving on with their lives.

The staff, initially, were a little dozy (forgive the pun) but we were soon attended to by the manager, after I dubiously asked about cocktails (I was still in a post-NYC bubble). They do do them, but not usually. I settled for a beer. On the manager's reccie, we ordered a Tandoori Platter to start - mushroom tikka, cauliflower, baby corn, and paneer tikka, all marinated in the chef's special spices and tandoori grilled. We also received a complimentary Special Crispy Bhaji, because I think he liked being asked lots of questions about the food!

The starters arrived quickly and were utterly delicious. Not your typical curry house dishes, although they seemed familiar, they were lighter and more fragrant. Perhaps it was the missing meat. Oh - did I mention it's all vegetarian?! Yes, I knew that before I went... But although I am a complete carnivore (my friend isn't - she eats very little meat, so it suited her perfectly), I didn't miss it at all. The variety of dishes was as good as anywhere.

For mains, we ordered the Thali. Although everyone around us was eating dosas - huge domed crepe breads with lentil dipping sauces and freshly made chutney and the filling (or not) of your choice, I have to go back as they looked so good. So so good. But still, our thali was just lovely. An age old South Indian meal, with small bowls of daal, curry, vegetables and rice, as well as a small dosa (no, not just like the other ones of which I was so envious) and even a gulab jumann for dessert. Although it looked teeny, it was more than filling, and showcased a plethora of flavours, textures, colours and tastes.


Afterwards for our cocktail fix, we wandered round Piccadilly and were more than satisfied!