My baby girl turns seven this week. She loves the Rainbow Magic books (we won't judge...) and wanted a RM party with a Fairyland Palace Cake. No problem! Although it did take me about two days...

Try not to worry if the towers lean a bit. She will love it nonetheless!
Posted by Unknown at 22:17:00 5 comments:

In all the frenzy of Wimbledon, it seemed a little odd to be making cricket cupcakes, but hey, there's grass, and balls...
For a friend's little boy's seventh birthday: 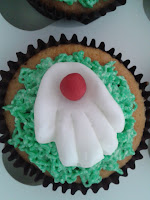 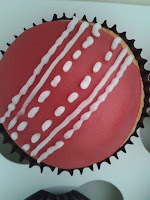 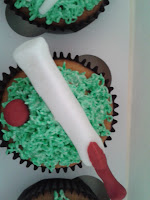 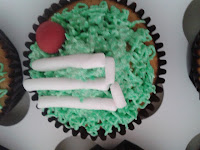 Have you ever eaten a Michelin starred meal standing up? I have. Everyone knows that the Italians do it best, and the kitchen design company Made in Italy, with their tagline L'Italia Che Vive (Kitchen, Soul, Design) chose three passionate food-loving Italians to celebrate and promote the excellence of the Italian Kitchen, at an event in City Hall, overlooking the skyscrapers and historical monument of the heart of London.

Giorgio Locatelli is the talented Italian-born chef who earned a Michelin star in 1999 for his first London restaurant  Zafferano, and another in 2003 for the Locunda Locatelli in Mayfair. On the evening in question, Chef Locatelli oversaw Claudio Silvestrin, Italian architect and designer, and Gianluca Vialli, former Chelsea player and manager who now lives in London, staging a culinary demonstration in a specially designed kitchen. It was a little like watching a live version of Saturday Kitchen, listening to their conversations, quite likely scripted, in which they spoke of the kitchen being the heart of the family home, and the soul of Italian gastronomic heritage. Mr Vialli set to work on the scallop risotto, later doused in Prosecco by Chef Locatelli, whilst Mr Silvestrin made the monkfish and rocket starter. We didn't get to taste their efforts directly but the CEO did, and seemed surprised it was so palatable. On prompting from the glamourous MC, Mr Vialli compared English football to a meat pie - full of passion and energy, and the Italian players to a tiramisu - all about the lifestyle.


Chef Locatelli's dishes were then served to us in designer bowls, as we stood taking in the views and admiring the sleek, innovative kitchen, while we sipped Prosecco and savoured the simple yet delectable flavours. Dessert was an incredible cannoli served with a summer fruit coulis - utterly delicious. As if that wasn't enough, there were truffles and yet more Prosecco. Buonissimo...

Meeting Senor Vialli at the end of the evening for a quick photo, was certainly a highlight, as was the sublime menu cooked by Chef Locatelli. Thank you to Ali from Fabric Magazine for the invitation, and the photography.

Happy Birthday to the School of Wok {Giveaway!}

Having soy enjoyed my Quick Fire class at the School of Wok, I was thrilled to be invited back to help celebrate their first birthday. It was an evening of fusion between wonderful food and perfectly complementary drinks (no, I don't mean complimentary, even though they were). Greeted by the lovely Adrienne, with a glass of sparkling Sauvignon Blanc, there were bloggers, journalists, friends and family to enjoy the demonstration stations and sample the delicious food prepared by Jeremy, Nev, and Stefan.
Each dish was beautifully complemented by drinks provided by A Grape Night In, and there were three stations where Stefan demonstrated Dim Sum, Jez showed us how to roll noodles, and we were able to construct our own summer rolls.

Delicious, practical, and fun!
Thanks to all the School of Wok folk, and Happy Birthday! 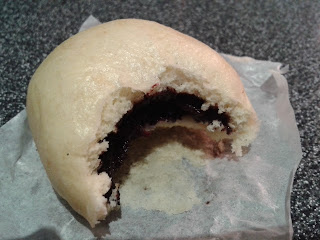 And the winner is...

I have a 20% off a School of Wok cookery course voucher for the best wok- or soy-related pun. Leave a comment below and I will choose the best one by 14th July (voucher valid until December 31st 2013). I may consult with Laura and Kiki and Of Rice And Jen in the event of extreme genius.