Now that the nights have drawn in, the weather has turned chilly and the only skin I am displaying is my face, my thoughts return to sunnier, carefree times. We spent our August holiday in Paphos, Cyprus. Three long months ago now. Sigh... The heat there meant we could do fewer activities and more laying around the pool. Just my kind of holiday. And not the kind I've done for a while, what with all the kids...

Of course, the highlight of any holiday, for me, is the food. From the fresh seafood...

... and of course, tzatziki with every meal!


We stayed at the lovely Anemi Aparthotel on Posidonos Avenue, very close to Bar Street (which you may wish to avoid) and only a ten minute stroll to Paphos Harbour.

Our first port of call late on the evening of arrival was a Cafe Lounge Bar called Pingouino. Here my first Cypriot meal was Pork Souvlaki. Served with a Greek salad and, yes, a local Keo beer. Ah, we had arrived!


Due to the heat at that time of year (not complaining, just sayin'), we didn't venture far during the day, so we had many lunches by the pool at the Anemi, in the Turquoise Cafe.
Cyprus Dips was warm pitta served with the four traditional dips - hummous, tzatziki, taramalasalata, and tahini. I ate this most days! I also had halloumi and lountza (smoked pork loin) in pitta which was very filling, and the squeaky cheese entertained the kids! 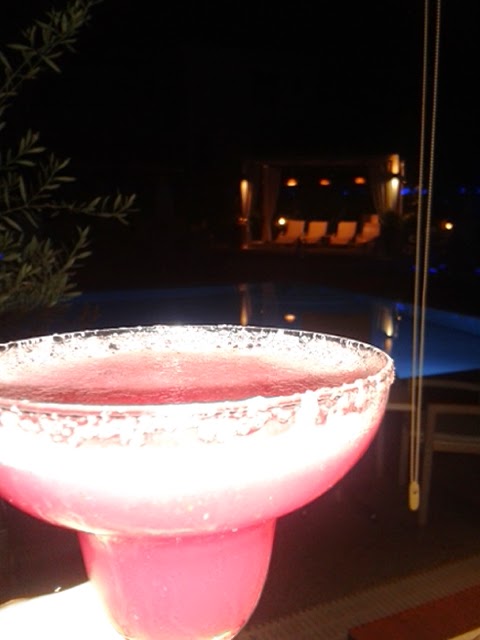 By night we drank many a Strawberry Daquiri, you know, just so the kids could collect umbrellas and other cocktail paraphernalia.


A non-Greek meal in the gorgeous Gold Sakura Japanese Restaurant, just around the corner from where we stayed. It featured a table at the teppanyaki grill, our very own chef (from the Phillipines!) with his salt and pepper pot routine, followed by a knife skills dance, and he cooked our egg fried rice, sea bream, chicken, and duck tenderloin right there in front of us. Using lots of 'Japanese Coca-Cola', apparently. Which turned out to be Kikkoman Soy Sauce. A great experience, lots of fun. The kids loved the starters too, duck tempura (her new favourite food - she always asks for it now, everywhere we go...) and BBQ spare ribs. Mmm hmm.


One (late) morning we sampled the crepes at Vienna cafe 'Crêpe Land', on Posideon Avenue.


Other evening meals included souzoukakia (spicy meatballs) at the Almyra, where we dined on a deck right on the sea. Although it was expensive it could have been oh so romantic...

A very nice Italian restaurant, Porto Bello, served pollo bruschetta with sundried tomatoes, chicken and cheese and the Pizza Special - chilli, honey, chicken and raspberry, a strange combo which worked really well. We also received vegetable tempura on the house. Fantastic service too, made all the more special with the Limoncello chaser.

The Grill Garage was a family run restaurant serving sizzling and traditional Greek dishes, all very well presented and beautifully cooked. We intended to return here. If not for the food, then to read some more of the food-related quotes!

"When engaged in eating, the brain should be the servant of the stomach." Agatha Christie

The Imperial Chinese Restaurant overlooked a few bars and restaurants, as we sat out on the terrace, but the inside was modern and beautifully decorated with tanks of tropical fish. Eating Chinese food in Cyprus or any Mediterranean country can be dubious, but this place was great. Another one we would have returned to.


On our last evening, we decided to go traditional at the Mandra Tavern. Rather disappointing to be honest, as it felt like they were just catering for tourists (which I expect they were). If I were to go back I would have what the couple on the next table were having, it must have been about 20 courses!

Our pre-flight meal was Moussaka at Tampania (TaMttavia), over looking the sea and enjoying one last Keo beer and the sunset.

All photos my own (Smartphone). All TripAdvisor Reviews in the links written by me.
Posted by Unknown at 17:16:00