My little boy had a party for his teacher leaving to go on maternity leave. 'Bring Party Food - cake, biscuits, or crisps'! So...a trip to Sainsbury's? No... 'Mammy can we make cupcakes?' 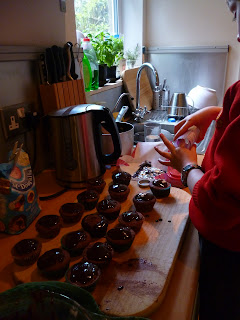 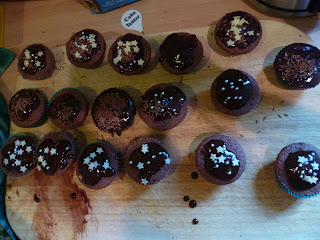 So 'we' used this recipe for Chocolate Fudge Easter Cakes. They are quite easy really, even if you are not a baker. They were the first ones I made and they really work. And taste great. I made them while they were at school, and when he came home, he decorated them himself, with some improvised chocolate icing - melted half a belgian dark chocolate bar, a knob of butter and some icing sugar. I let him do the icing and stick all the decorations on. He was so pleased, and he got to lick the bowl. His classmates scoffed the lot...
Posted by Unknown at 22:07:00 No comments:

This one is from another Indian cookbook, The Indian Kitchen by Monisha Bharadwaj, given to me by my sister. It's more of an authentic Indian food one, rather than trying to re-create restaurant dishes. Some crackers in it though! This is one you can find in a restaurant but I've never tried it - it was recommended by a friend as her regular takeaway dish, though she likes it mild, I've thrown two chillies in!

Start off by marinading the chicken in yoghurt, mint (a big bunch), coriander (likewise) (unfortunately I didn't have any... ) ginger, garlic, chilli and turmeric and a pinch of salt.


Then gently fry some cardamons, cloves, black peppercorns, and a cinnamon stick, just for a minute or so. Add in some chopped onions and cook until translucent. Then chuck in any other (green) veg you fancy, I used courgette and (red) pepper. I know, you sometimes just have to compromise. Then add in the chicken and the marinade. Be careful to lower the heat here, to prevent the yoghurt from curdling. Unfortunately I didn't take my own advice here, and it did curdle a bit, but I managed to save it by lowering the heat straight away and adding a little water and stirring it round. Cook this until the chicken is done, nice and tender. Add in some ground almonds towards the end to thicken it up a little.


Nice and tasty. More yellow than green though, thanks to the turmeric. I think fresh coriander would have made it even nicer. And despite the two chillies, yes, those little red ones which are Really Hot, it wasn't that hot, must have been all the yoghurt. But I will try this again, with extra chilli!
Posted by Unknown at 22:19:00 No comments:

Indian food. Difficult to cook at home, authentically. Well, like you get in a restaurant (I've never been to India... yet). But I've used this cookbook A LOT and sometimes, just sometimes, it's better!

Tonight I cooked Chicken Tikka Masala from The Food of India, by Murdoch Books. It was one of the best I've made, according to Himself. My spice cupboard contains as many spices as I can squeeze in, so all I really needed was some yoghurt and some cream, some ground almonds, and chicken. I haven't yet attempted to  make my own bread, so a nice naan bread from the shop on the Green was good enough. Didn't bother with any rice.

First the chicken was marinaded in tandoori masala, lemon juice, chilli powder, paprika, garam masala, garlic, ginger and yoghurt. You are supposed to leave it over night, but an hour or so was enough (hungry!). Then stick it on some skewers and put it under the grill, turning sometimes (when you start to smell something burn...).

Then to make the sauce, chop onions, peppers and some cardamons, fry for a while, add in some garlic, and then a tin of tomatoes. Cook this off until it gets nice and thick. Then add in a little cinnamon, garam masala, chilli powder and a teaspoon of brown sugar. Cook this for a minute then stir in some double cream and ground almonds, then chuck in the grilled chicken and simmer for about 5 minutes. I threw in the rest of the marinade too at some point, pity to waste it. There was plenty of sauce leftover for the next time we fancy a quick curry.

Really, really yum. And it doesn't take very long, marinading aside. Try it!

Mushroom Risotto - without the mushrooms (or the risotto)

Sometimes you just have to make do with what you've got in the fridge and store cupboard, (or the press, as we say in Ireland). I knew we had some sausages to use up. Sausages and mash! But there were no spuds...

So somehow I thought, hmmmm, mushroom risotto, I'm sure I have some mushrooms left from my veggie friend night. But no, none of them either. So what to cook?

Sausage Risotto! Based loosely on a Jamie Oliver recipe, I fried the onions, peppers and cut-up sausages. Then threw in some rosemary and then the rice (Basmati - haven't got any risotto rice either. Mind you, I've never made risotto before - what AM I doing?). Went to the fridge for some white wine (not drinking tonight, honest), opened it up, and it's RED! It's all very mixed up today, isn't it? One of my Saturday guests must have brought a bottle of Les Plates Pierres and stuck it in the fridge without me noticing. Maybe I should have a drink after all.

Anyway, added the wine, cooked it off, then some chicken stock (I like the organic Kallo ones, as they are supposed to be healthier...) then, some little tomatoes and herbs. Just kept stirring until the stock was absorbed, then kept adding little cups of water until the rice was done. Stir in a knob of butter at the end, just to cream it up a little.

It tasted ok. Just ok. A bit like a bowl of chicken soup. Sprinkled over some parmesan to add a bit of something, but still, not my scrummiest supper.

Then the following night we had to have it again! Himself added some chilli sauce and a couple of Sainsbury's lamb kebabs. Now we've finally used up all the barbecue stuff from Saturday. It was better, but I don't think it's something I would rave about and cook again.

I did take a photo but it didn't do it justice. Well there was no justice to be done. Next time I have sausages to use up, I HOPE I have spuds in.
Posted by Unknown at 11:21:00 No comments: 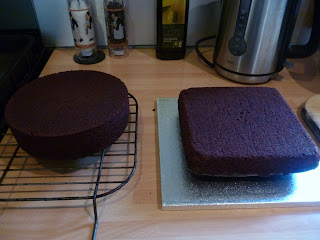 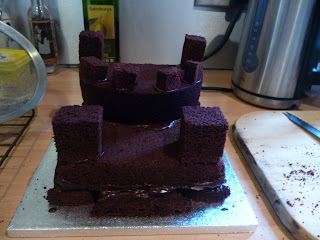 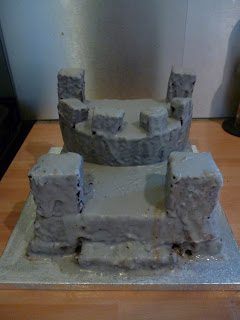 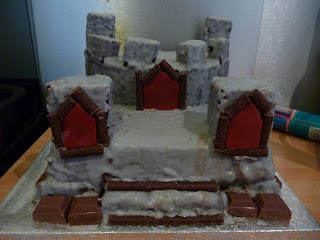 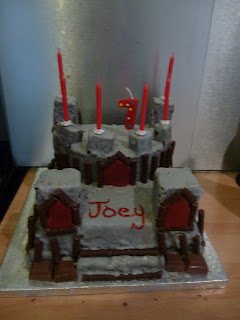 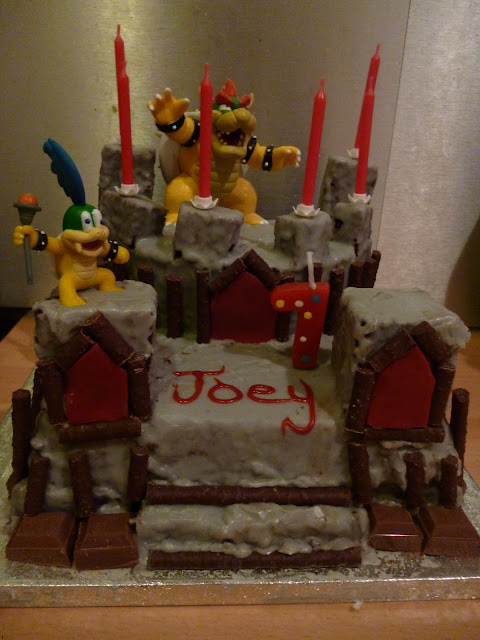 Last night my very good friends came for dinner. I made some salsa and guacamole, bought some hummous (is that how you spell it? I never know), doritos to dip. ... and I made chimichangas!  Vegetarian (are they usually?), with onion, peppers, tomatoes, (little teeny ones), mushrooms and chilli. I added some ground cumin and coriander. Then grated cheddar and feta. Wrapped all this up in tortillas, just enough for six, then I baked them instead of frying. Grated cheddar, sour cream and spring onions on the top. They weren't so crispy as you would get in a restaurant, but better I think. And hot smoked paprika new potatoess. Salad on the side, and my girls were happy.

The cookbook I used was called Bite-Size Mexican (published by Hamlyn) and I used it for the chimichangas and the guacamole. I found this book in a charity shop years ago and I've used it many many times, so simple to follow, always happy with the result. For the salsa I used my sister's recipe, using little cherry tomatoes (which just sweetened it up a tad), garlic, chilli, spring onions, squeedge of lemon juice and fresh coriander.. The girls took the 'leftover' salsa and guacomole home for their boys! And Rachel Allen Easy Meals provided the potatoes, although she uses wedges.

So a delicious evening. Simple really. 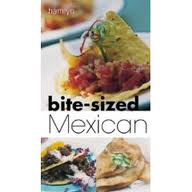 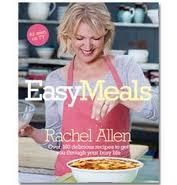 Ah Spanish food. I first found it by eating at Tapas Brindisa in Soho with my friend Kate. Run at the time by José Pizarro, I soonafter purchased his cookbook Seasonal Spanish Food and found that it's not just Paella! The tortilla, the catalan spinach and the chorizo in cider are just delicioca y sencilla. Well, to be fair the tortilla takes a while, but it's worth it.

So having just now returned from a week in Majorca with the little family, I have to say, it's hard to find Spanish food in holiday resorts! We spent two weeks in Tenerife last summer and of course it caters only for tourists (German and British), and only one night did I have the pleasure of real Tapas. I suspect if we had ventured outside of Playa de las Americas, there may have been more on offer than pizza, steak with peppercorn sauce, pizza, chicken and chips, and indeed, the laughable, English Tapas - potato croquettes, chicken wings, cheese in breadcrumbs... sigh...

In Majorca we stayed in a lovely marina town called Portals Nous. The food was better indeed. Each restaurant had, of course, the usual, but I managed Mallorcan Lamb Shank, which was just delicious, in a restaurant called José's, (not the same one). And Panorama Playa (which did indeed have a view of the beach) served ración chorizo and some good alioli.


Still, need to go back to somewhere else in Spain for more. I would love to return to Majorca. But in the meantime Pizarro can keep me going... 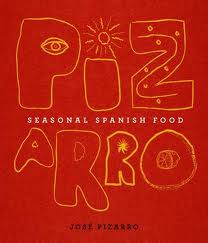