Lunch date with Himself. It's not often we get to eat out together, sans bambinos, and when we do it tends to be a rushed lunch. This time we made a bit of an effort and met outside Leicester Square tube station. We had a gift voucher for Tredwells, and I'd booked the Star Deal through Bookatable, three courses and a dessert cocktail for £29 each. I checked via email beforehand and got a prompt and positive response. But we still had to get back for the school run...

When you want to try somewhere fancy, or even just famous (not always the same thing!), these star deals are a good way of doing it on the cheap. Obviously you don't get the full menu (though you can still have that if you are willing to pay more), and for a quick (ish) lunch in Covent Garden, it works well.

We were seated upstairs in the mezzanine, overlooking the outside space, and Dishoom across the road. We watched as the queue there grew and grew, with someone offering aperitifs while they waited, whilst we sipped on our (non-alcoholic) drinks. Watching this clock too: 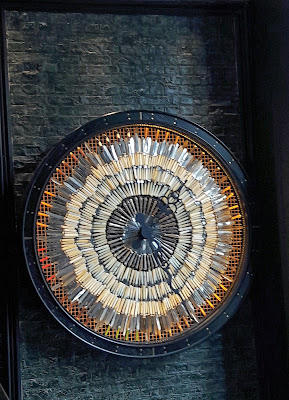 Tredwells is owned by Michelin starred chef and MasterChef presenter Marcus Wareing. He doesn't actually cook here, I'm assuming, but his name is enough to draw people in. Situated right in the heart of Theatreland and Seven Dials, and named after the Butler in Agatha Christie's The Seven Dials Mystery, it has a handsome, dark-tiled interior, with a laid back eclectic atmosphere, and superbly attentive yet unintrusive staff. The Star Deal menu offered four starters, four mains, and four desserts, with one of each incurring a supplement and sides were extra too. Essentially British dishes, each with some flamboyance. Below each dish is a recommended wine specific to that dish. If only it hadn't been lunch time...

We ordered music bread (also extra), doused with lemon and balsamic, which was an excellent start. Thin, crispy and infused with the sweetness of balsamic vinegar and a touch of lemon juice. Beautifully presented, I suspect it was named for the attempts to look like sheet music...!

Starters were presented MasterChef style. Things I'd never heard of mixed with unrecognisable components. My pork belly raviolo was actually delicious, tender pulled pork inside a pasta square with sweet caramelised sauce and just a hint of a tang. Himself ordered the radicchio, not really knowing what it was.. he wasn't overly impressed! The nettle was slightly overpowering the rest of the dish, the radishes (I assume that's what they were) al dente and rather chewy, the ricotta quite bland. The salted slices of 'bread' were lovely though.

Main courses appeared small, but actually were just enough when you're having three courses - as long has you have triple cooked chips on the side. The chips were very crispy and some were hollow inside, missing that fluffiness you expect. My sea bream was delicious, light and healthy, with green all over it. Himself was somewhat disappointed with the size of his lamb chops and complained that one was cut in half - turned out that was the shoulder part. Both were overcooked, he thought, not red in the middle as promised. The broad beans and mint sauce saved the dish though. You can't beat mint sauce.


Desserts are not usually our thing - I make them, but don't often eat them. As the portions so far were just-enough, (and dessert is included in the offer!) we went for a salted caramel ice cream with honeycomb and a chocolate mousse with orange blossom panna cotta. Rich and decadent, the mouse was not only pretty but scrumptious too, and the salted caramel - well, you cannot go wrong with that flavour. A perfect ending.

Finally a mini Espresso Martini each, and then back out to Covent Garden's tempting shops and home in time for the school run.

There are so many places to eat in Covent Garden, and although I may not return here (though maybe for the ice cream), it was a relaxed and reasonably priced lunch. For an evening meal I believe you can also avail of the Star Deal menu, pre- or post-theatre, so it's worth a visit for the prestige and the presentation.

Bookatable Star Deal: £29 per person for 3 courses and a dessert cocktail