There is so much to do in Barcelona. Escaping from the dreary Autumn weather in London, Himself and I had a Cava-infused culture and food fest in this fantastic city. As well as visiting the amazing Sagrada Familia, Casa Batlo, both infamous and unmissable Gaudi designed architechural masterpieces, wandering the Barric Gothi in search of Picasso's favourite haunts, an evening mingling with Barcelona FC fans around Camp Nou on the day of El Classico against Real Madrid, and even an afternoon on the beach, right there in the city, of course the highlight for me was the food. Real Spanish Food.

Tapas at Bar Plaza on Placa de Sant Josep
(First day - no idea where we were!) 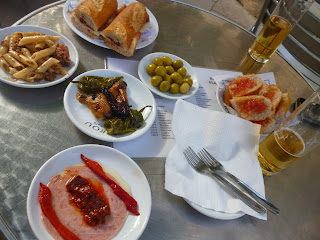 Tapas and Rioja at Casa Tomasa, at Passeig d'Isabell II. Romantic, and friendly service, close to the marina, but not so close it's too expensive.

Brunch was a Bocadillo with serranito pork with iberico jamon and sweet red pepper at Terraza Sweet, Moll d'Espanya. A bit of a tourist trap, I fear, but I enjoyed it. 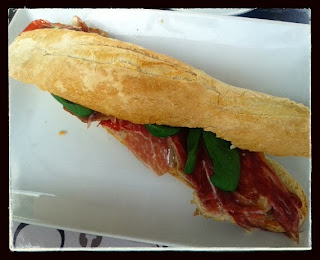 Tuna tataki at Restaurante Grill Room, Carrer dels Escudellers. Just a slight break from the tapas, this was really delicious. Don't worry, I still had Rioja.


Pre-Gaudi Catherdral lunch was a salsichon bocadillo at La Palmera with a full on view of La Sagrada Familia. Excellent location, but they could have made so much more of this.

...Himself ordered Steak and Pepper (typical!) and got a steak with padron peppers! Yum!

We watched some Star Wars/Trek people wander by on a little Placa near El Born, while we sampled calamari (first meal of the day, really shouldn't have been calamari...)


Chips with beer? No! Patatas Bravas at Bar International just off La Rambla, expensive beer, to be expected for the location.


Of course, no self-respecting foodie can visit Barcelona without spending several hours at La Boqueria Food Market! An amazing range of fresh everything, I only wished I'd had access to a kitchen for the weekend!!