It's quick. It's easy. It's Dee-licious.

At the end of a long Tuesday (following on from a very long Monday), with a teeny fridge packed to the gills with opened packs of this and that after the weekend, it seemed a good idea to use up as much as I could and free some space (to be filled rapidly by more beer).

Sprinkle the chicken with the spices, drizzle over the soy sauce, season and toss in the oil.
Wrap the bacon slices around each mini fillet in a twirly fashion.
Roll in the sugar (or just sprinkle over if it gets messy).

Place on a baking tray lined with greaseproof paper and bake at 200 degrees for about 30 minutes, until the chicken is cooked through and the bacon is nice and crispy.

Serve with (in this instance) roasted new potatoes tossed in olive oil, garam masala, cumin seeds, and salt and pepper. They should take about the same time if cut in half. Oh, and throw in some asparagus for the last five minutes if you need a veggie fix. 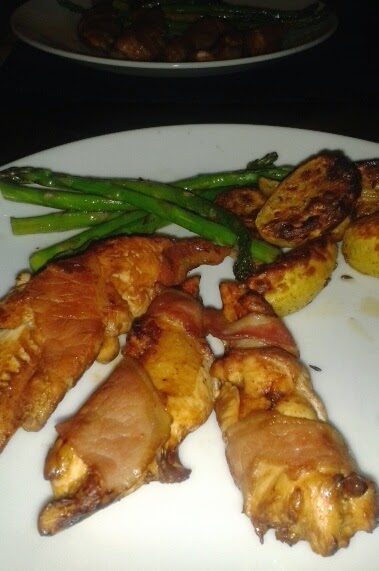