Forever Nigella #22 Food to Cherish your Loved Ones

Forever Nigella #22 is hosted by Sally of Recipe Junkie and the Attack of the Custard Creams.. This month’s challenge is to blog any Nigella recipe which represents Food to Cherish your Loved Ones.
Forever Nigella is organised by Sarah at Maison Cupcake.

I don't actually own any Nigella cookbooks (Shock! Horror! Although it is my birthday soon...) but I have been dipping and diving on Nigella.com, and this Old Fashioned Chocolate Cake was one of the first cakes I made for my little boy and has been a resounding success every single time I've made it.

First attempt was a practice run for my little boy's 6th Birthday cake. A 'Well Done at School Cake' it was called. 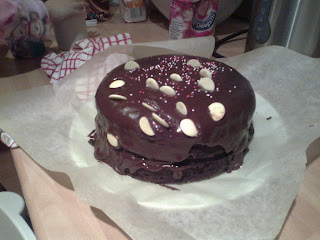 Next appearance was at the 6th Birthday itself...

And then my little girl jumped on the bandwagon for her fifth - a Tangled cake.
This was a square Nigella, plus some mini Victoria sponges for the tower:

And then by special request, my little boy's seventh birthday 'That chocolate cake again this time with Bowser's Castle, please, Mammy'. So a round one, and a square one, with the round one chopped up to make various turrets.

And my little girl's turn again, for her sixth.
First a practice run - doubled the quantities again for this giant cupcake, and then a repeat of this for a My Little Pony special.

A friend at work, who, strange as it may seem, loves chocolate cake... simplicity working surprising well.

And finally (for now) a friend's little girl turned four, asking only for purple, orange and green... well what else could I do, besides chop Nigella's round cake in half and make a Rainbow cake.

So if you love someone, make them a chocolate cake!