With the little family all pre-occupied with football, Wii, colouring in, I de-camped to the kitchen and started on some cakes. After the bolognese, I felt like doing something sweet.

I had pinned this recipe earlier so I wanted to try it:
Lemon Cupcakes by Like Mam Used To Bake

A lovely recipe, the only thing I didn't have was buttermilk, so I put some normal milk in a cup and squeezed some lemon juice in it and gave it a mix - think it worked quite well. 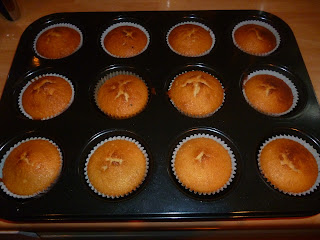 Unfortunately I forgot to add the lemon zest to the butter, so... eh... they weren't very lemony! But still very nice.

And for the buttercream icing, I realised I had run out of butter! So I just made royal icing with some lemon juice in it (I really needed it to be lemony after my earlier omission). However, Madam decided she wanted to help with the decorating, so the lemon theme was lost in pink colouring... Oh well. 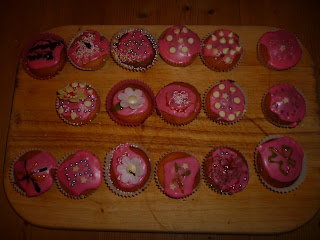 Still, a really nice recipe and I will try them again, remember the lemon and get more butter.