I came across a book called The Hindi-Bindi Club by Monica Pradhan,(Bloomsbury, 2007) about three Indian mothers who emigrated to Washington D.C., and their daughters. Not only is it a good story, it also has recipes at the end of each chapter, authentic Indian recipes, all dishes cooked at some point in the story, during a time of comfort, or celebration. I really enjoyed the book, now I'm going to really enjoy the recipes! I also get to use my cup-measuring spoons! 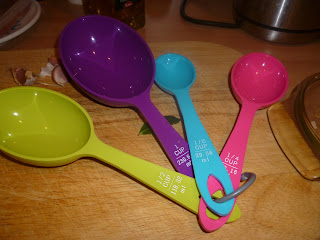 Chicken with Almonds and Raisins

Lightly toast the almonds for about 15 minutes, and set aside.
Puree the ginger, garlic and onion, and set aside.
Heat some oil in a wok, and on high, fry the whole spices: bay leaves, cardamoms, cinnamon, cloves and cumin, for about 15 seconds, then add in the chicken and sear it all around, for about 3-5 minutes. Then set this aside.
In the same wok, add the paste and stir-fry until the liquid evaporates.
Next stir in 1/3 cup of milk, reduce the heat, cover and simmer until it evaporates, 3-5 minutes, then repeat this twice until you have a nice thick sauce.
Stir in the chicken, cayenne, coriander powder, salt and water, bring it all to a boil, then reduce the heat again, cover and simmer for 15-20 minutes, stirring occasionally.
Stir in the raisins, simmer for a further 5 minutes.
Remove from the heat, and discard the cinnamon stick and bay leaves, if you can find them!
Lastly, stir in half the almonds, half the fresh coriander and garam masala.
Serve, with rice, sprinkled with the rest of the fresh coriander and almonds.

Yummmm-eeeeeee. Authentic as you can get, (I imagine!).