My first commission! My friend asked me to make a birthday cake for her little girl who is four. The brief was: Purple, orange and green, her favourite colours...

So, a rainbow? I trawled through Google Images, as ever, for inspiration, and came across this lovely one on Cake Central.

So, enlisted the skidgers to 'help', and got them to separate the smarties into separate bowls. They were then allowed to eat the brown ones. (And later the pink ones too).


Next I rolled out some green sugarpaste icing, for 'grass'.

Then I made Nigella's Old Fashioned Chocolate cake, always a favourite - easy to make AND tastes good - and always works! Make two, as it says in the recipe, and slice in half so you have four sections.

Then make some purple and orange icing, and using three of the four sections, slap them together with two different colour buttercreams. I used Dr Oetker's gel colourings, you have to put nearly half a tube in, and still only really get a pastel colour. 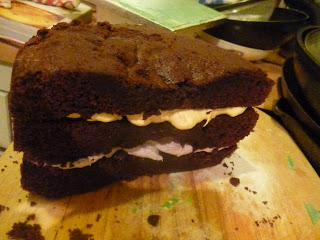 Then stand these up on the 'grass'.

Then cover the cake in white glacé icing - the one where you just add a couple of teaspoons of water to the icing sugar! I think you really need marzipan here, as the white colour is a little bit lost here over the chocolate cake, but it somehow turned out a lilac colour, so it wasn't such a bad thing! Also don't make it too liquidy, as it will flow off the edge. I blocked it up with white marshmallow (Clouds!)

Next, add the smarties in the right order, of course, neatly along the top.


Then I used some green buttercream and a special grass nozzle in my piping bag to make some grass. 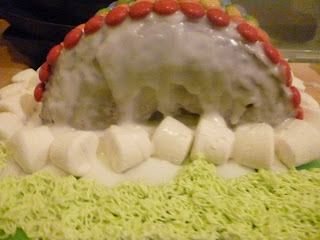 Stick on a few sugar flowers - the purple ones are from Sainsburys, the orange ones are just smarties surrounded by orange chocolate buttons (Disclaimer: my little girl made these!) 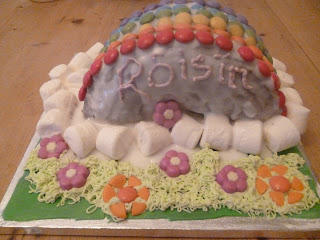 Then use the last of the purple buttercream with a writing nozzle for the name. Ta-daaaaaaaah!!

Lots of fun and a very happy little four year old (and mammy!)


Check out my other Birthday cakes
Posted by Unknown at 22:18:00