Chicken and Couscous tagine with Chorizo

My first attempt at Moroccan food after two Friday nights out. The first was on Upper St, where I had a lamb and pumpkin tagine at Maghreb, which was very tasty, and one in Maison Touareg, on Greek St in Soho, where I had a delicious white fish tagine, with potatoes and peppers served with Tangy spicy sauce - this was really good!

So, inspired by these two suppers, I wanted to try it for myself. Again I turned to Rachel Allen (she of Easy Meals) and made her chicken and couscous tagine (with added chorizo).

This is a  quite impressive dish, and simple enough in itself.
Simply toast some chopped almonds, being careful not to burn them, then set them aside. Then season the chicken breast cubes (and chorizo) and fry in olive oil until browned all over (again, careful not to burn the chorizo).
Lower the heat, and add some more olive oil, then add in some onions, garlic and a cinnamon stick. Cover and cook for about 8 minutes until the onions are soft.
Next add a pinch of saffron, with about a pint of chicken stock, and stir in about two spoons of runny honey. Bring to the boil, then lower the heat again, cover and simmer for about 20 minutes.
Stir in the couscous, cover, and cook for 3-4 minutes, until the couscous is soft, then stir in the toasted almonds. 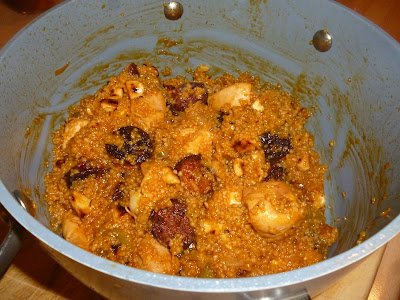 It's a sweet, fruity, spicy dish, well worth having again the following night!